A Time to Retreat

The idea of “retreat” is not new. Humans have been taking time to leave their usual lives behind and take quiet time for themselves for as long as we’ve walked the Earth. The Sanskrit term pratyahara means “withdrawal of senses from external input”—and in both Yoga and Buddhism there is a long-standing tradition of practicing pratyahara on retreat, with or without a teacher, to turn in, meditate, be with oneself, let go of everyday life, and experience a sense of renewal.

We Need To Make Time

Personally, I try to make time for retreat several times a year. I need time to pull back from my busy life, be quiet, pull in, and reconnect with myself. Sometimes I retreat by simply staying home, meditating, walking, not answering the phone, or not checking my emails. Or it can be taking a day or weekend in quiet, pristine nature. Wilbur and Harbin Hot Springs are places I use as retreats. And for the past few years my retreats have taken my wife, Michele, and me to other countries. 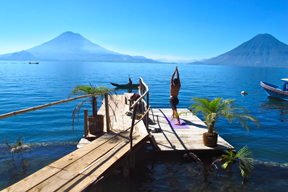 In 2009 we did a survey trip to Bali, exploring the whole island and getting a feel for the spirit of the place—the people, the food, the daily Hindu-based ritual that Bali is famous for, and the land itself. We fell in love with Bali and the Balinese people. In the process, we found a beautiful retreat center, named Prana Dewi, in the middle of the island, far away from the hustle, bustle, and touristy parts of the island. We decided to bring a group of yoga students here and lead a retreat. We also decided it would be a yoga/culture retreat. We wanted participants to have the opportunity to deepen their meditation and yoga practices with twice-daily classes in each—and to also have time each day to experience the culture.

The Journey To Bali

Back home, we put out the word and got a tremendous response. I teach yoga at Chico State, In-Motion Fitness, and Chico Sports Club, encountering lots of yogis on a weekly basis … many of whom have become steady students of mine. Michele is a photographer and specializes in capturing the subtleties of everyday life in foreign cultures. We ended up with 14 people willing to make the long journey to Bali. We were the leaders, but it was and always is a co-creative experience. Everyone brought something to the group. For some it was a particular talent; for others it was simply being who they are. Practicing meditation and yoga, eating meals, and going on adventures together for a week is a positive feature of a group retreat—by the end of the week you have a new family. We now lead several retreats a year, at home and abroad.

Along with the opportunity to slow down, turn in, and practice without distraction, another gift of these retreats is our encounters with native people. In each place we have visited, the native indigenous cultures are still somewhat intact and, while materially poor by our standards, vibrant and spiritually alive. The retreat centers are almost entirely staffed by local people, many of whom don’t speak much English—so we get to dust off our Spanish or Indonesian. We have had many heartwarming experiences connecting with the places and people we’ve visited.

The Simple Things In Life 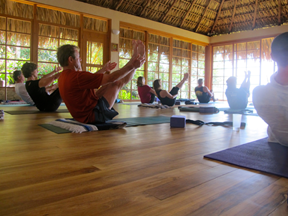 One experience that stands out was one evening on Lake Atitlán in Guatemala, where we made our second retreat. Michele and I were on our way to a small restaurant to have dinner when we came upon a small, young Mayan girl and her equally small grandmother carrying enormous loads of firewood on their backs. The older woman was grimacing and obviously not feeling good. We asked where they were going and they pointed up a long, steep hill. We decided to help them. We each picked up a load of wood, which was much heavier than we expected, and carried it up the hill. The two Mayans walked behind us, very grateful but also rather embarrassed as we passed some of the men of the village on our way up the steep hill. We reached their small hut and, sweating but very happily, set our loads down. We all had tears in our eyes as we said good-bye. We agreed that this was by far the high point of our trip.

We have planned two yoga/culture retreats for 2013. One is to the Wilka Tika Retreat in the Sacred Valley of Peru, June 24 to 30. The Sacred Valley was the center of the ancient Inca world. It is near Cuzco and Machu Picchu and next to the Urubamba River. The second is a return trip to Bali. This will be a New Year renewal retreat at Prana Dewi—December 30, 2013, to January 4, 2014. If you feel the desire to retreat, contact us.