Why Our Cellphones Are Killing Gorillas 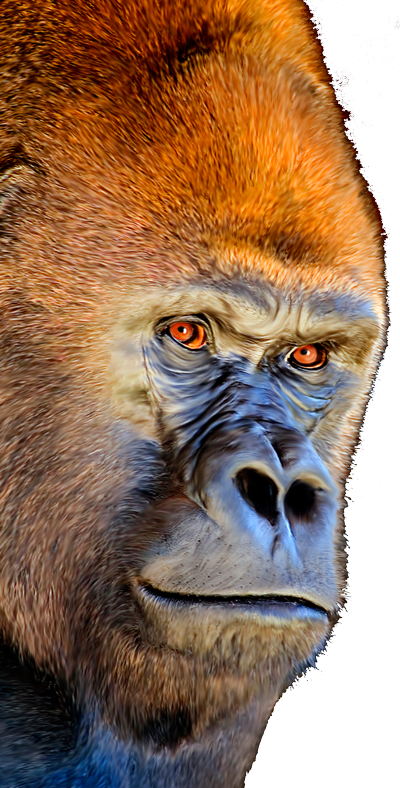 I know the title sounds almost as if it’s the beginning of a sick joke, but it’s not. A mineral found in almost every piece of technology we use—computers, iPads, cell phones, and so on—is called columbite-tantalite, coltan for short. When refined, coltan becomes a heat-resistant powder, metallic tantalum, that has unique properties for storing an electrical charge.

In a recent report from the United Nations it was shown that the militia involved in the local civil war’s in the Democratic Republic of the Congo make their money mining Coltan. An example of the money being made would be that of the nearby Rwanda army, which made more than $250 million in less than 18 months by simple playing the middleman in selling it. Then there are the military forces of Uganda and Burundi who are also implicated in smuggling coltan out of the Congo for resale in Belgium. The enormous amounts of profit that go back into the rebel groups are obvious, but there’s also the aspect of child labor, human smuggling, and environmental degradation.

It is the environmental degradation that directly affects the gorilla population, Often, if hungry miners come across a gorilla they kill it for the “bush meat” because they make less than $10. per month. In Kahuzi Biega National Park the mountain gorilla population has been cut in half, from 258 to 125 as the ground is cleared to make mining easier. 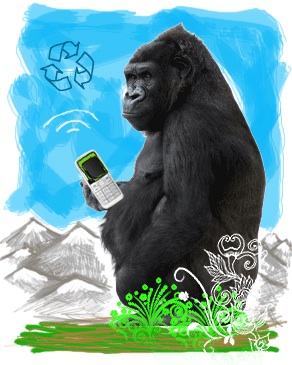 diamonds, we can also change the way coltan is mined and sold by putting the light of consciousness on it. American-based Kemet, the world’s largest maker of tantalum capacitors, has asked its suppliers to certify that their coltan ore does not come from the Democratic Republic of Congo or from neighboring countries. Such moves could lead to the marketing of “gorilla safe” cellphones, much in the same way that tuna meat is now sold as “dolphin safe.”

What Can We Do?

Many of us feel overwhelmed when reading about something such as this; however, there is something that every one of us can do. For instance, I still have 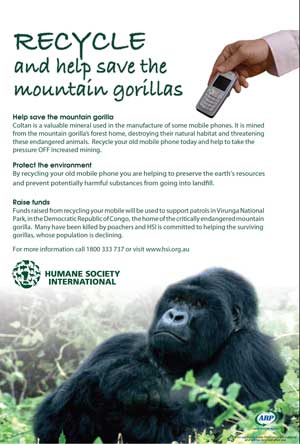 a flip phone that I’ve had for many years; it still works just fine, and everything in our office is updated equipment. For example, the Mac G5 computer we recently bought is a 2009 upgraded with solid-state technology and it works great; we also recently bought a refurbished iPad. Would we like to have all the latest technology on the market? I suppose if we lived in a perfect world, yes. But our world is far from perfect and everything has a cost.

As always, my opinion about this world boils down to the fact that without a massive leap in conscious awareness we will not make it as a species, but I think this is happening; your reading this article is a sign of that process. But along the way we can make changes in our buying habits and stop buying “into” the latest upgraded cell phone on the market when the phone we have works perfectly. Would you eat that tuna sandwich if you knew a dolphin gave its life for you to eat it? This problem is much worse than I’ve written about here so please do your own research and the next time you pick up that brand-new iPhone, look into your heart and ask yourself if the price you are paying is worth the life and possible extinction of yet another sentient self-aware species on our planet.

Save the Last Remaining Gorillas in the World

(Across from Papa Murphy’s Pizza)

Funds generated from your recycled cell phones help raise funds to help Save the last Gorillas located in the Congo where 80% of the known conflict mineral Coltan is known to exist.