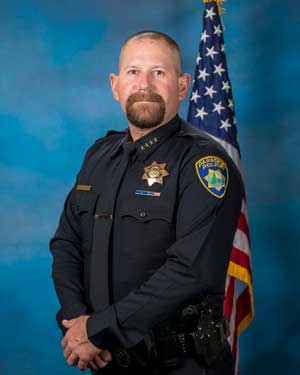 For anyone paying attention, it’s easy to see that something very strange and dangerous is going on regarding protests and law enforcement in our country. We all know things can go terribly wrong with protests and law enforcement, Kent State comes to mind. But now the situation has been reversed where law abiding citizens and even law enforcement officers are at risk in the “Protests Gone Wild” world we now live in. One of my concerns is that the message brought out about racism in our country is being lost in the violent nature of the protests.

This is obviously not a safe situation for peaceful protestors or citizens caught in the middle while police departments in many major cities are told to stand down and sanction protests that by any definition are not peaceful.

When I told people in the community that I was going to interview Paradise Police Chief Reinbold the main question that came up was, “What are you going to do if a protest becomes violent, destructive and dangerous to the citizens?” This is perfectly understandable because so many cities are sanctioning these events even to the point where in Seattle they let them take over six city blocks, destroy businesses and even break into the police department and loot it.

So here is an edited version of my interview with Chief Reinbold and I also have the entire interview on the Lotus Guide website so you know nothing was taken out of context, including the 911 Call from a terrified mother and child. I would like to thank Chief Reinbold for being brave enough to answer some tough questions, and Sergeant Pickering, whom I ambushed outside of Holiday Market who confirmed that when someone breaks the law, they will be arrested…period.

Lotus Guide: One of the things I would like to bring up is in cities like Scottsdale, AZ, Tampa, Minneapolis, and Seattle there seems to be a tendency to let the crowd go and hopefully “burn out” and not respond. I’ve been listening to 911 Calls, do you mind listening to this and responding?

At this point I played a 911 Call from a mother with her child in the back seat that was trying to get home but found herself in the middle of a so called sanctioned protest that in reality was a very dangerous riot where the rioters were trying to break into her car. She was told that the “protest” was a sanctioned event so no help was coming. The mother went on to say that she was in danger and had a small child in the car. At that point the 911 Operator told her that she should call the City Hall with her concerns. Help never came. You can hear this in the interview online at www.LotusGuide.com/ChiefReinbold.

Chief Reinbold: I think that is a clear example of big-city politics where they’re telling police departments not to enforce laws. Here you have a dispatcher that’s having to relay that to somebody who clearly needs help and the officers are not allowed to respond to that, and that’s sad.

LG: So what will your response be if we have a protest and it turns into a riot?

CR: If there was an incident, we’ve talked, meaning myself, the sheriffs and other police chiefs, and we would request and utilize mutual aid; in other words we would request agencies within the county and in the region if we needed to. And we would do what we need to do to maintain order. I know that’s easier said than done, especially seeing what some of these agencies have been faced with but we’re not going to just stand by and let something happen to our community.

Here I went on to talk about what happened in Scottsdale Arizona at the large shopping mall where hundreds of people basically ravaged through the mall taking whatever they wanted and the police never came, although the community was told on 911 calls that the police were there and present. I also wanted to get the Chief’s point of view about defunding the police and what exactly does that mean. I also brought up how over the years I’ve seen the value of the chain of command and the fact that the police department is part of the executive branch of government, but I see that blindly following orders can be dangerous in today’s world. I also touched on the idea of how dangerous it is in today’s world to join the police department and end up being in a situation where you could not only lose your job but also your freedom.

CR: It is concerning when there’s talk about abolishing the qualified immunity. (Qualified immunity is designed to protect all but the plainly incompetent or those who knowingly violate the law. Law enforcement officers are entitled to qualified immunity when their actions do not violate a clearly established statutory or constitutional right.) I get your point about the chain of command and I do value that but we would never ask our officers to do anything unethical, illegal or immoral.

LG: I would like to get your point of view on systemic racism within law enforcement. Personally, I don’t see it (and statistics backs this up) and it seems like it’s being fueled by the media to a large degree.

CR: I’ve been in the Paradise Police Department for 14 years now and some of our officers of been here for 20 years, some are new, and some have come from other police departments, I don’t see it. I’ve never seen in my career where there is that motivation to specifically go out and target and enforce laws only because of someone’s race. We have Racial Profiling Training that we do every year. I do think a lot of these topics are being fueled by the news and social media. It’s spiraled to a point now where it’s a little scary because people are [reacting] to what they’re hearing and it’s often not true.

I wish we had the editorial space to transcribe the whole interview, however, there are parts of the interview that might be a little controversial for some groups which I actually touch on in the article I wrote for this issue. These are tumultuous times we are living in and it will do all of us a world of good to start understanding the position we are all in, black and white, law enforcement, citizens, business owners, etc… we’re all in this together. And the only way we’re going to make it through this, is Together.

Directly below is the interview with Chief Reinbold, then some other videos of what happens without some law enforcement. No matter what a protest is based on, when it comes to the safety of citizens and public property there has to be guidelines.