We all do it: We stuff our feelings after a fight with our partner so that we can function at our jobs. Or we smother the grief of a relationship loss once our friends have heard enough. Ideally we journal it out later or dance the feelings away. But sometimes emotions are retained in the tissues of our body, walled off to protect us from discomfort. There is a cost: chronic pain, numbness, anxiety, or a lethargy too heavy for creative pursuits.

Somato emotional release (SER), a method used in craniosacral therapy, allows a safe way of releasing the energy of anger, grief, or other emotions that have been trapped in the body’s tissues. When stuck emotions are released, people report feeling lighter and having better use of the affected area. 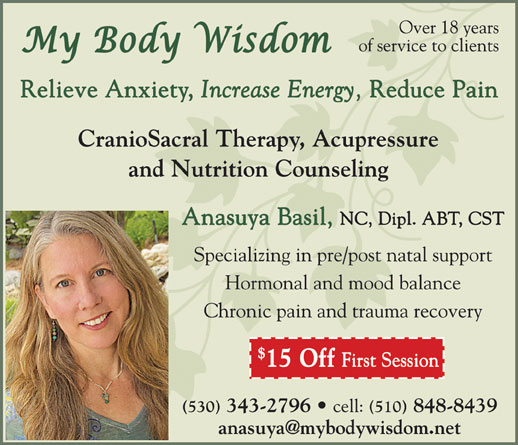 Janine suffered from a painful neck and left shoulder, along with tingling in her arm and hand. During our session, I connected my hands to the back of her head and neck, feeling the blocked areas. Her neck started to move slowly, and I followed its unwinding. When I felt her cerebral spinal fluid (the salinelike solution that nourishes the brain and spinal cord) stop abruptly, I held Janine’s neck in the same position, and Janine began to express feelings of loss. Several years previously, she said, she had nursed her husband through a long illness and his eventual passing. As Janine spoke, her neck began to release heat.

Janine suddenly realized that her heart and head needed to reconnect. In response, I placed a hand on the back of her skull and on her heart, tuning in to both areas. I asked if it would help to imagine the energy of unconditional love between Janine and her husband. As she felt this love, Janine started to relax, and with my hands, I could feel the fluids begin to move freely throughout her body. By the time Janine left, she no longer felt pain or tingling. That night she had an uplifting dream about her husband.

When I place my hands on your body, I imagine my hands are an extension of your tissues. This “blending” allows me to feel the flow of your fluids, the places where flow is blocked, and the places where the energy feels chaotic. Holding a neutral energy means that I neither direct the session nor try to fix the problem my way. I believe in the wisdom of your body, so I let your body lead the way. I am present with a wide awareness, as in meditation.

I know that when I am a client on the table, working with a practitioner who is blended and neutral with me, I can really relax. I have freedom to explore the sense of being in my own body. I have room to allow feelings to arise, to give voice to them if it feels important, and to watch the changes in how my body feels as that happens.

Development of the SER Concept

Craniosacral therapy pioneer John Upledger, DO, developed the concept of SER together with biophysician Zvi Karni, PhD, DSc, as part of their work examining the healing process. Drawing from their combined knowledge of medicine, biology, physics, and engineering, they came to understand that at the time of trauma, an energy cyst forms in the body. The energy cyst then creates entropy: In the affected area, molecules move in a chaotic way, interfering with the conduction of electricity. That area of the body is no longer able to perform at its full ability. When the energy cyst is released, there is a palpable increase of temperature in that area, as the area returns to normal function, or at least, closer to it.

A craniosacral therapist is always monitoring the flow of the cerebral spinal fluid. The therapist can feel the rhythm of the fluid by placing her hands anywhere on the body. Normally the fluid moves in waves, but when a client is feeling or picturing something important, it will stop abruptly. This change allows the therapist to detect when something significant is happening, and therefore, to be highly attuned to the client’s inner landscape. When a therapist feels the fluid stop abruptly, she may ask an open-ended question, such as, ”What are you experiencing right now?”

It is not always comfortable to reexperience fear, pain, or anger, but letting it go often results in less physical pain, as well as greater understanding and better energy for self-healing. Sometimes emotions are released as energy instead of through reexperiencing an old memory. Your body will know when and how you will be ready to free yourself from stuck emotions. Trust your inner wisdom and find a practitioner you resonate with—someone who will follow your body’s lead through this transformational process.

I had the good fortune to study directly with Upledger and to be his teaching assistant in SER classes. I was amazed by the way he perceived the slightest shifts in a person’s body. For the next decade, I attended many of Upledger’s advanced classes and cofounded two craniosacral therapist groups to enhance my skills. I dove deeply into understanding this process so that my clients could feel safe releasing stuck emotions in their sessions with me.

Anasuya Basil, NC, Dipl. ABT, CST, is a practitioner of craniosacral therapy, acupressure, and holistic nutrition in Chico. Her work has been featured in top media, including Fox News, The Huffington Post, and the CBS morning show, Good Day Sacramento. Contact her at 510-848-8439, www.mybodywisdom.net, or anasuya@mybodywisdom.net