Take a Walk on the Golden Road

The bold statement heading the website declares a lofty goal: “Bridging the past with today for a better tomorrow.” And in Nevada City, California, it’s happening right now. With a mission to “explore the intersection of arts and culture, health, environment, peace and justice, and science and technology,” the Golden Road Radio Hour seeks to build a better future through education, empowerment, community building, and positive social change.

At its core, the weekly Golden Road Radio Hour is a fast-paced, two-hour show highlighting useful and inspiring ideas, presented by a variety of individuals who are actively sharing their gifts with the community. You might listen to a valuable holistic health tip, followed by a moment from Nevada County history, a report on GMO legislation, and a demonstration of healing vocalization. The presentations are interspersed with musical performances, stories, interviews, and humor—with different themes and concepts explored weekly. Some of the shows are performed and recorded with a live audience, adding another dimension to the presentation. 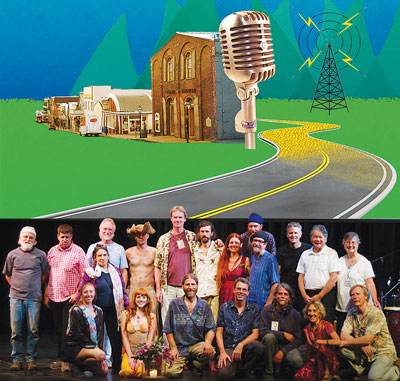 Similar to the biological process, birthing an idea and nurturing its growth takes substantial time, energy, and commitment. And so the Golden Road Radio Hour was born during the past 18-plus months, initiated by musician, producer, educator, and Drums Around the World founder Michael DiMartino—and aided by a multitalented team of volunteers.

Arriving in Nevada County about four years ago, DiMartino was inspired by the variety of talent, knowledge, and skills represented in this modestly sized Sierra Foothills community. As he interacted with more and more people, he began looking for ways to give them a microphone to the world—a means to spread the messages of hope, joy, and healing to a wider audience. And having produced major events such as a millennial world music festival in Egypt in 1999, and a five-day festival and conference at the Mayan Pyramids in Mexico in 2012, the format of a live show was a natural fit.

DiMartino and other team members have extensive experience in radio, television, and music and audio production. These elements have been brought to the foreground, bringing excellent production values to the show. With the folksy character of Prairie Home Companion, the breadth and impact of the TED talks, and the musical variety of eTown as inspiration, they developed a concept that included live radio shows (including audio and video recording, web streaming, and live radio broadcast), in-studio radio shows that are also videotaped for rebroadcast, and sharing the shows regionally in cooperation with other public radio and television stations.

Members of the local community were invited to participate in developing the show: contributing as presenters and entertainers; providing the audio- and video-production backbone; keeping the show flowing smoothly backstage; and helping to nurture its growth. Strong links have been forged with Nevada City TV, the thriving KVMR community radio station, and the local performing-arts venues in the area. As Michael DiMartino says, “There’s a seat on the bus for everyone.”

The August 2016 launch of the Golden Road Radio Hour included three live radio shows held in the historic Nevada Theater—California’s oldest existing theater still in operation. Throughout each evening, members of the audience were treated to a variety of short talks, music, poetry, dance, storytelling, and visual arts. They were able to see, hear, and participate in the nuts and bolts of a live production as it happened while enjoying some great entertainment and inspiring thoughts.

These first shows were recorded and filmed, with the second show broadcast live on KVMR radio and the third show live-streamed to the Internet. They have been edited and are available for viewing on Golden Road’s YouTube channel and the website. Featured musicians included Ma Muse, Brandon Phillips, multi-instrumentalist Paul Ong, World Beatnix, the Rayos, Art Rock Ensemble, and Gary & Eva. Juggler and storyteller Izzi Tooinsky added a dollop of humor to the second show, and the audience at the third show was treated to both Persian and flamenco dance. Part of the proceeds from each show went to local nonprofits, including Hospitality House, FARM, and the Friendship Club.

A team of regular content providers is in place, variously involved in the recorded and live parts of the show. “Global 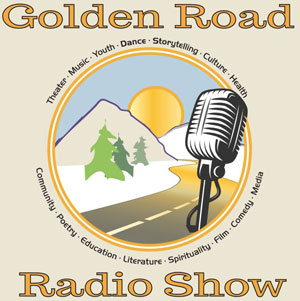 Rhythms,” the environmental issues of “Range of Light,” “Sound Advice” with healing sounds, “Gift of Health,” the “Peace and Justice Report,” and “Inner Path” are typical features. Leslee Sesno provides “In the Field” interviews by “collecting voices from the community about social issues, with the aim to bridge the gap across generations.”

There is still room for you to become involved. Members of the team meet weekly, with a spirit of consciousness and collaboration, as they plan the next steps. Interested content providers can go to the website and send a note on the Contact page describing their presentation.

Check out the shows online on YouTube or at www.goldenroadradiohour.com, and listen 6-8pm every Sunday on Sacramento’s KUBU 96.5 radio or on KVMR as scheduled. The videotaped shows can be seen on NCTV Channel 17 in Nevada County, Access Sacramento Channel 17, or Tahoe Truckee Channel 6 community television. Come take a walk on the Golden Road …