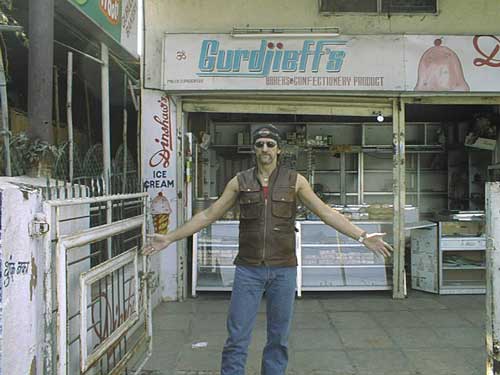 Rahasya in the photo while in India

Gurdjieff and the Fourth Way

When I first interviewed John Anthony West the whole point of the interview was to get into the research on ancient Egypt. I’ve always admired his tenacity for standing his ground against the system; in his case it was the academic system for the most part. But what became apparent right from the very beginning was the fact that we had a common interest in the Gurdjieff and Ouspensky’s teachings. One of the things that came about in a more private part of the interview was how for centuries information about our true human history on this planet has been suppressed by organized religion, governments and more recently corporations and banks. So what is this information? What I’m talking about here is information that would actually make this world we live in more habitable, sustainable and equitable for all human beings. One example is alternative energy systems. But very slowly this information is leaking out, even the report about the fact that there are unidentifiable flying objects flying around in our atmosphere. The United States Air Force recently released a statement admitting to the fact that they know that there are unidentified flying objects in our atmosphere and they have no idea who is flying them, why they are here, or where they came from. [Reference]

But what I’m more interested about is the information that has been suppressed for millennia about how we can wake up and actually manifest a higher and immortal body in this life. You can still find fragments of this in sacred literature, i.e. John 3:1-21-KJV. This is where John Anthony West and I got into the information that goes well beyond ancient Egypt. This information has been suppressed and hidden from society for far too long. The academics don’t want this information released because this has nothing to do with what they’ve been teaching for centuries. The governments of the world don’t want this out because it would empower us well beyond anything they can even imagine. Organized religion doesn’t want this released because it would undermine their standing in the world as spiritual and moral leaders. To add to this and using the words of John F. Kennedy, “… we are opposed around the world by a monolithic and ruthless conspiracy.” This is why we have found ourselves in endless wars for far too many years. This is why people like Maj. Gen. Smedley Butler wrote a book called War Is A Racket. [There’s so much more to say on this but that is for a different time]

So let me shift gears now and get right into the heart of exactly what this teaching called The Work or the Fourth Way is. We, as human beings are incomplete. If we set out in the world to find our way in the realms of spiritual awakening we quickly realize that we lack the tools of understanding to assimilate the information. John was quick to give credit to Gurdjieff when it came to understanding the early works of R.A. Schwaller de Lubicz and ancient Egypt. During our interview John was bringing up the fact that we live on a planet where every one is asleep. The best that most people can even hope for through traditional ideas and trainings is to come to the conclusion that they are asleep. This in itself is actually a huge step towards awakening. Imagine if you will, being in the middle of a dream at night and realizing that you’re asleep and dreaming. This is the beginning of waking up from the dream. So you might be asking why don’t we wake up. The answer is simple, it takes extremely dedicated work and discipline and most of us love the drama that we create in our dreams.

Personally I have reached the point in my life where I’m tired of the drama and I want to wake up to higher spiritual and conscious realms no matter what the cost. I think a lot of us are at this point now in our lives. I can’t even begin to tell you the importance of watching and really listening to what John has to say about Gurdjieff in the interview below.

So who is Gurdjieff and The Work?

First thing to approaching this is to understand who George Gurdjieff was. He was born in Alexandropol, Armenia, which in the late 1800’s was part of the Russian Empire. He spoke seventeen languages and was very familiar with over 2,000 folk stories his father could recite. What is generally known about him is that he travelled to Iran, Egypt, India, Tibet and Central Asia with an unquenchable desire to learn ancient knowledge. What is a little less known, and up for debate, is that he found at least 6 hidden monasteries that have their roots going back to ancient Sumeria and even further back to Atlantis.

Whatever the truth is, one thing is undeniable; his influence on the world was and is as profound as it is hidden from most scholars and seekers. Some of the people who were heavily influenced by Gurdjieff were Aldous Huxley, Thomas de Hartmann, John G. Bennett, OSHO, Frank Lloyd Wright, and many more.

Gurdjieff had the good fortune of, in my opinion, to meet P.D. Ouspensky who brought his teachings to a wider audience and made it comprehensible to the upper middle classes who were more intellectually sophisticated. The writing style of Gurdjieff is in sharp contrast to P.D. Ouspensky’s style which becomes clear in his books like In Search of the Miraculous, The Forth Way, A New Model of the Universe and many more that lead you to a clear and decisive perception of your relationship to realty and the possibility of your conscious evolution to levels hidden and incomprehensible to most seekers.

What lies at the foundation of this teaching is that most people live out their lives in a hypnotic state using misinformation to navigate their lives by, which in today’s world has become obvious and dangerous as we move into a world with advanced technology. George Bernard Shaw once compared our world with living in an insane asylum and said “Beware of false knowledge, it’s more dangerous than ignorance.” Herein lies the difficulty in today’s world of false prophets, fake news, and disinformation coming from traditionally trusted sources like news media, religious organizations, corporate/government organizations, and spiritual leaders and gurus of all shapes and colors.

Gurdjieff’s work is about giving up one’s fantasies, most of which were indoctrinated into us from a very early age. To awaken to our own inner experiences and not the experiences of someone else thousands of years ago who may or may not have even had an experience in the first place; which would be a little like looking at pictures of food and expecting to be nourished. Somewhere in this process is the realization that we are all connected with everyone and everything.

One of the things Gurdjieff was known to have said was that most people will give up any of their pleasures but will not give up their suffering. Could this be more apparent than it is in today’s world where we medicate and entertain ourselves to avoid feeling the very suffering we cling to.

Lotus Guide: I think one of the greatest misunderstandings in the early part of inner work is when you say something like, “I want to wake up,” that part of you saying it won’t be there when you actually wake up. This is why people spend lifetimes in a deceptive cycle of playing the game of enlightenment.

John Anthony West: Exactly. We have a group here where I live and one of the things we do is we collect stories that exemplify this. I’ve always liked the one of when the disciple goes to his master and asks him, “What does it take to wake up and find the truth?” Then the master takes him down to the river and holds his head under until he’s gasping for air. Just when the disciple thinks he’s going to drown, the master pulls him up and says, “When you want the truth as bad as you wanted to take that next breath, come and see me.”

So why am I writing this article at this time in my life?

Simple, it’s time to get serious about waking up to the insanity going on at this very moment in our names because trying to change things with the same level of thinking that created this reality would be to continue the insanity with a different disguise. If you have some knowledge of this teaching and would like to go deeper, we are putting together a very small group of serious seekers and will meet here in Paradise once a month. rahasya@usa.com or call 530-894-8433

Other Articles by Rahasya Poe:

A Dream Within a Dream by Rahasya Poe