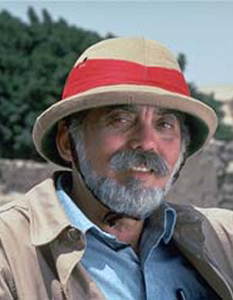 What started out as an interview about ancient Egypt and John’s amazing research based on earlier research by R. A. Schwaller de Lubicz quickly became an in-depth conversation between two Gurdjieffian followers and how the inner work was instrumental in understanding what he calls Magical Egypt. You must watch the entire interview at www.YouTube.LotusGuide.com to get a true depth of understanding of what we are touching on here.

You can watch the complete interview by scrolling down.

Lotus Guide: The first thing I’d like to say to you, John, is the fact that I have a lot of respect for your research and your tenacity for getting to the truth no matter what it takes. In some ways you remind me of Gurdjieff, because he also had a passion for finding hidden information and making it available in such a way that people could actually assimilate it and bring it up to the level of wisdom instead of just intellectual information. So I’d like to set the tone of this interview in that direction, because a lot of your information isn’t just information. I really think that it’s catalytic in its truest sense and could help us to create a better world through expanding our consciousness. Where we stand now is that we’ve created a world that is simply unfixable, and if we’re being honest, shouldn’t be fixed. It needs to be replaced and that can only happen with an expanded consciousness.

I remember your saying that the temples were not just a place where teaching took place; the temples themselves were the teachings. So I’m curious as to how much of your information came from an intuitive level by experiencing the temples. 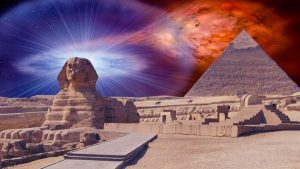 John Anthony West: The truth is, is that it wouldn’t be possible to do it with just your head or your intellect. Goethe once said that architecture is frozen music, and this becomes very clear as you walk through the temples. It’s important to understand that this isn’t just metaphorically true, it’s structurally true. In the case of the temples it’s a little like being inside the instrument as it’s being played. By the way, you mentioned you are into Gurdjieff’s work?

LG: Yes, most of the books you see in the background deal with Gurdjieff or Ouspensky directly or indirectly. I used to go to groups down in Point Loma but for the most part my work has been independent. As you probably know, reading Gurdjieff can be a laborious task to say the least, which is why a lot of my books are by Ouspensky and many of Gurdjieff’s students.

JAW: Yes, I know what you mean about Gurdjieff; he’s almost impenetrable but well worth the effort. It was through his work that allowed me to understand R. A. Schwaller de Lubicz and his research on the temples in Egypt. It’s an unfortunate fact that many great minds aren’t the best communicators; this is where it’s important to have an intuitive feel for what they’re talking about and at the same time be willing to do the necessary work. I agree with what you were saying before, because I would hesitate even calling this a civilization when you look at how we are living. It’s shiny barbarism. It’s not fixable because it was a catastrophe from the beginning.

LG: Let’s face it—you could ask any preschooler what would happen if you developed a resource-based financial system that requires infinite growth and if it stops growing it will collapse, and you were going to implement this system on a planet with finite resources. I’m sure that with just a modem of intellect, a child could easily figure out that this is a system that is destined for failure.

JAW: This is the danger of information that hasn’t been thought through by unconscious individuals. Take religion for instance. Religion is something that you do actively, but it has become something that you just believe, which has very effectively stopped the search in religious realms.

LG: Don’t get me started on this, because I wrote a book on the social and neurological consequences and dangers of belief systems in a civilization with advanced technology. It seems that once you set up a belief structure in your mind, at that point your belief ends up filtering out anything that conflicts with it. The obvious reason for this is the identification with the belief by the ego. So let’s talk about Egypt and your research that led to the documentary series Magical Egypt.

JAW: When you go to Egypt the first thing you notice is that there are so many things to experience and they all operate on a very profound level. When you get done with a couple of weeks in Egypt, you really understand on the deep visceral level what civilizations were once like. Without that personal experience you’re really missing out on some of the deeper experiential truths. If you ever go on my tour of Egypt, you will also see that without a proper foundation of understanding you would never really get to the esoteric truths and teachings of the temples. The unfortunate truth about life is that most of us are asleep, making it very difficult to take information past the intellectual level where it can be assimilated and brought up to a level of wisdom. It takes a lot of inner discipline and unfortunately most people aren’t willing to do the work.

LG: Well, let’s face it, this type of work, Gurdjieff in particular, is not for everyone, as unfortunate as that may be.

JAW: I remember when I was involved in a group in London one of the members brought a psychiatrist to the group. But the group told him that the purpose of the group was to bring the subnormal up to normal, not to bring the sub-subnormal up to subnormal. This work can be somewhat dangerous and impossible for a person who hasn’t been prepared and brought themselves to a certain level of understanding.

LG: I think one of the greatest misunderstandings in the early part of inner work is when you say something like, “I want to wake up,” that part of you saying it won’t be there when you actually wake up. This is why people spend lifetimes in a deceptive cycle of playing the game of enlightenment.

JAW: Exactly. We have a group here where I live and one of the things we do is we collect stories that exemplify this. I’ve always liked the one of when the disciple goes to his master and asks him, “What does it take to wake up and find the truth?” Then the master takes him down to the river and holds his head under until he’s gasping for air. Just when the disciple thinks he’s going to drown, the master pulls him up and says, “When you want the truth as bad as you wanted to take that next breath, come and see me.”

LG: To get back to ancient civilizations, you and I have a difference of opinion on ancient aliens, so I’ve suspended my viewpoint because I want to hear what you have to say on how these civilizations appeared out of nowhere and just as quickly sometimes vanished. I can only think of three reasons that this would happen. One is if we slowly evolved to a high point of civilization and are wiped out by an asteroid or some cataclysmic event. And two, if we were visited by an advanced race of beings from another world that helped us create a civilization that we simply could not maintain when they left. But I think where you and I may have common ground is on the subject of the procession of the equinox, which indicates that there are times when we collectively wake up to a high level of understanding and there are times when we collectively go to sleep and enter into what we most recently called the Dark Ages.

JAW: Well, first of all, I don’t completely dismiss the alien hypothesis; it’s just my least favorite. As an academic, if you don’t have hard evidence you have to go to the most plausible reason for something. And in my case it’s the doctrine of the Yugas, which is the Hindu understanding of the procession of the equinox and what Plato would call the Silver Age, the Golden Age, the Bronze Age, and the Iron Age. Everything seems to have its season, and just as there is a season for planting roses there may be a season to wake up and a season to go to sleep. Yogananda’s teacher, Sri Yukteswar, talks about this very clearly in his little book Holy Science. For me this is a very plausible scenario to explain the ebb and flow of ancient civilizations. For whatever reason, humanity seems to come into very advanced knowledge and consciousness at certain times throughout history. Unfortunately, traditional history doesn’t encompass historical dates that go back many hundreds of thousands of years in some cases.

LG: Even though I still think we have been influenced by advanced beings from another planet or even other dimensions, I see what you’re saying and this most probably enters into the equation also. The important thing here, and this goes for me also, is to keep on thinking and doing the research and work and not get attached to something just because you “believe” it’s true.

Because we are limited in editorial space I urge you to watch this interview on our YouTube channel to really understand the deeper content and meaning of what’s being said.