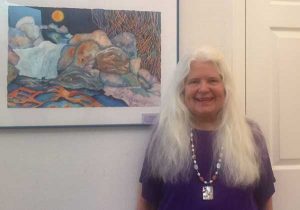 An Interview with Marianna Love

Her Life, Her Art, and Her Passion for Teaching

It’s not uncommon for me to write an introduction about someone we’ve interviewed; in fact, it’s fairly easy … usually. As I sit here I’m realizing that there’s no way to summarize the lifetime of achievements of this amazing woman who lives in a town called Paradise. I can give some of the details, such as the fact that she retired in 1999 from Butte College, where she created and taught classes such as “Yoga, Mind, and Consciousness,” “Holistic Living,” “Psychology of Dreams,” and “Psychology of Creativity and Intuition,” and who for 12 years was a transpersonal psychotherapist in private practice. Marianna was part of social and spiritual movements at places such as the Esalen Institute in Big Sur, where she interacted with people who changed the course of psychotherapy and conscious evolution. It was during this time that she met her husband, Ray Varlinsky, who has been at the forefront of not only psychotherapy and deeply involved in HeartMath and the Gottman Institute, but also on the cutting edge of technology to accelerate conscious evolution. At this point, most people would have called it a day; however, Marianna Love is not “most people.” 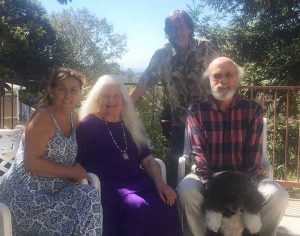 Marianna was more than 40 years old when she decided to take up art. Oddly enough, it’s at this point that her life expresses itself through what she calls “Playing with Creation.” Looking at her art is the best way to see the world through a visionary’s eyes, not through the lens of a camera or the limited perspective that most of us are locked into. To stand and experience the act of looking deeply into one of Marianna’s paintings is to be taken by the hand and led down the rainbow path of the vibratory healing power of colors and see yourself and the world as it should be … beautiful.

Marianna Love and her husband, Ray Varlinsky, are to this day living their lives as co-creators seeking to manifest the world as they know it should and will be, in harmony with nature and with a deep respect for its mystery.

Lotus Guide: Let’s start by going back to where and when you were born, Marianna.

as born in Ashland, Kentucky, and I was named after my grandmother and my great-grandmother, Mary and Anna. I had two brothers and I was the middle child. Looking back, I knew even then that I wanted to be a teacher and was teaching my younger brother and his little friends, who were probably in nursery school.

LG: What were you teaching your younger brother and his friends? 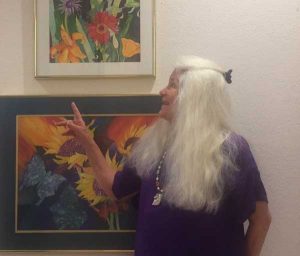 ML: I’m not sure but I was probably teaching them to listen to their teacher. J

LG: This tells me that from a very early age that you have valued the act of passing on information; it’s probably part of your nature because you still love to pass on useful information.

ML: My life became more interesting when I moved to San Francisco in 1964 to go to graduate school but I actually graduated from Chico State University.

LG: So that brings us up to being here in northern California, and I know we are skipping a lifetime of valuable experiences but let’s talk about the healing aspects of art and your art in particular.

ML: I think most people notice that my art has all the colors of the rainbow in it, which, in fact, matches the chakras of the human body, by the way. I have found that having that spectrum in my art is as important as having those colors in the food we eat. The reason for this is because all of the nutrients we eat cover this spectrum of colors.

LG: Funny that you should say that because studies have clearly pointed out that eight out of 10 Americans “don’t eat enough color” in their diets. They base this on phytonutrients, which are broken down into color groups.

ML: In the world we live in, it’s not only the color we are missing from our diets: The crops themselves are missing important nutrients, especially the GMO [genetically modified organisms] foods and the depleted soil worldwide.

LG: In the documentary Symphony of the Soil, they pointed out that over 40 percent of our planet’s erodible soil has been eroded due to monoculture and pesticides. But they also point out how quickly soil can be brought back to life through proper farming and care … if “we the people” had the will to insist on it.

ML: That’s one of the reasons I’m so proud of my granddaughter Lilly; she looks at world problems and is out there doing whatever she can to make the world a better place. Lately she has been putting a light on and helping young people who are being trafficked in our world.

LG: I just did one of my short “Questioning Our Answers” videos that touched on this subject. Every year there are over 1 million people, mostly young girls and boys, who go missing on our planet. The problem here is the fact that at the highest levels of the law-enforcement agencies involved in enforcing the laws, including the judicial systems and executive branches worldwide, are also involved, but not in a good way. This is why it is so important to put the light of consciousness on things like this; these actions take place in the dark and in secret societies. It’s important, no, imperative, that we start waking up and help others to do the same. Most of us live in this dream under the impression that we are awake … which is the deep sleep in which most people live.

ML: One of the classes I taught that I really enjoyed was “The Psychology of Sleep and Dreams.” I personally started taking extra Vitamin B6 because it has a dramatic influence on remembering your dreams. Plus having a notebook by your bedside to write them down immediately when you awake is also necessary.

LG: Many of today’s scientific foundations are built on information that came in dreams and altered states of awareness, like Francis Crick and DNA, and Friedrich Kekulé and the benzene ring, and many more that date back into antiquity. Oddly enough, many of those “altered states” have been made illegal in today’s world … but that’s another story.

ML: When I lived in Encinitas I got to know Francis Crick … thinking back, I have been so fortunate to have met some of the people in my life, including you and Dhara.

LG: It has been one of our pleasures, Marianna, to share some of this journey with you; we feel blessed and very fortunate. 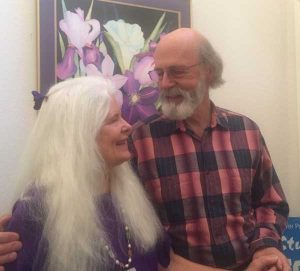 Note: Marianna and I could and have talked for days, and in fact, probably many lifetimes, sharing perspectives and differences of opinion, but always with love and empathy for the other. One of the things that we covered in this interview is Marianna’s passion for disseminating important health information on her Facebook page, www.Facebook.com/marianna.love.37 Marianna will be offering her giclée prints to the public and you can find out more on her website at www.MariannaLoveArt.net about this and healing aspects of her art.