A New Film by Jody McNicholas

“Inspiring the Creative Healer in Us All”

In 2010, the American Journal of Public Health published a sweeping review of more than 100 studies that connected the arts to physical and emotional healing. What they discovered was groundbreaking: Art reduced stress responses, increased positive emotions, reduced anxiety and depression, encouraged spontaneity, allowed for the expression of grief, helped develop positive identities, and led to involvement in important social networks.

All the scientific health jargon aside, however, we all know creativity heals because, well, it just feels good when we do it!

McNicholas is founder of Walk-In Productions, based in Taos and Santa Fe, New Mexico. Before moving to New Mexico, Jody lived and worked for nearly a decade in Chico, where she produced the pioneering documentary film A Wave of Compassion (featuring many Chico locals).

Jody’s latest creation, Longshotsville, tells the story of young actors in small-town Taos and their acting teacher, Metta   Theatre founder and director Bruce McIntosh (who is also a practicing Zen Buddhist). Through intimate interviews and sweeping footage of the rural landscape that these youth call home, we learn about their hopes, dreams, fears, and, above all, the spirit of determination that animates and drives them all.

“There was something magical about being around them,” says Jody about the young people who participated in the yearlong Longshotsville project. “I loved how courageous they were. Following them made me stand true to my own dreams. I went to document their dreams, and it made me reflect on my own life.”

McNicholas herself had a soul-level relationship with the project from the very beginning. She actually started out as a student in one of Metta Theatre’s acting classes and was so touched by the authentic connections and healing that occurred with the youth in that class that she decided that their creative journey must be put to film. Eventually, some of the actors became involved in the project behind the camera as well. The result was a “truly collaborative experience.” 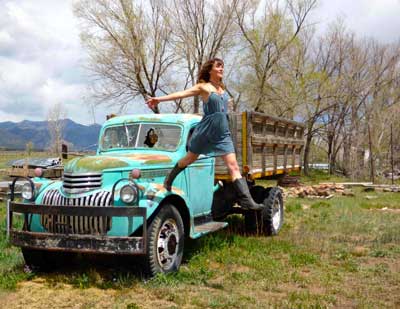 “Much of this project has been about capturing the essence of what Metta Theatre really is,” explains Jody. “Metta is a place where these young people, against all the odds, are really striving for something big—their dreams! What we discover as an audience is that their inner yearnings really aren’t for fame and fortune at all. Rather, they wish to find themselves through connecting with each other in meaningful ways and creating a community of true support.”

Nothing is staged or fake about Longshotsville, the latest creation from a truly gifted and inspiring filmmaker. Honest integrity oozes from the screen with each scene; there is no choice but to cry, laugh, and ultimately root for the success that all of these young actors define for themselves in their own terms. Along the way, what becomes crystal clear is the power of acting as a mechanism for healing. Their love of the art and craft of acting is what binds these young artists together in creative community.

“I would like the craft of acting to be more visible as a tool to engage and inspire our youth,” says McNicholas. “My experience at Metta Theatre—watching the interactions that occurred on stage with no cell phones, no alcohol or drugs —just two or more young people interacting—was one of the most powerful preventative medicines I have ever seen.”

Indeed, in the process of telling their personal stories, the actors in the film inevitably bring up larger issues to consider.

“Everyone has a unique voice, a unique story, and my motivation is to encourage our youth to never give up on their dreams,” says Jody. “We need the dreamers. We need the artists and the creatives. The arts need to be as valuable as any other subject in school today.”

“Longshotsville is a way to reach people who have not had the experience of being part of a group like Metta Theatre,” says Jody. “We can go along for the ride via a film and get a glimpse of the power of this art form and this community.”

As one of the young actors featured in the film, Syndesi, so wisely states:

“I finally came to understand that my path is not to destroy but it’s to create. … You have to go and you have to do what is in your heart. If you don’t do that, then what are you doing? You’re neglecting your talents, your abilities … your love.”

And sometimes the simple act of watching a movie about the healing power of creative expression can inspire us to express ourselves in our own unique way too. This is the beauty, and the gift, of Longshotsville.

So get yourself a digital download of Longshotsville. Keep it close at hand and watch it whenever you need a creative pick-me-up.

Then get to that acting class, pick up that pen and paper, stand before that canvas, or dust off that old guitar. Start creating yourself back to health … and repeat often!

After winning multiple awards at film festivals throughout the country, Longshotsville is being distributed via streaming media by going to http://longshotsville1.vhx.tv.

Nikki Lyn Pugh is a health blogger, writer, and coach. You can reach her through her blog, TheGentleTraveler.com.