If you find that you are belching, burping, bloating, or feel as if you have a ball stuck in your throat that you can’t swallow, you may have SIBO. 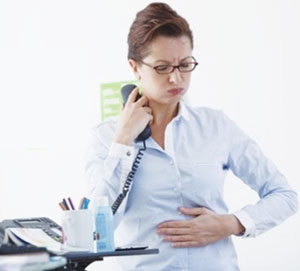 This is the acronym that doctors use for small intestine bacterial overgrowth. While it’s perfectly normal to have bacteria in our small intestine, we sometimes get excessive amounts of bacteria, which ferment food and cause excessive gas and bloating.

In mild cases of SIBO, you may experience only bloating after meals. In moderate cases you may experience constipation, diarrhea, or the symptoms of irritable bowel syndrome. In severe cases, people with SIBO may have malabsorption and become anemic, develop chronic diarrhea, and lose weight.

Overgrowth of bacteria in the small intestine has several causes. One cause is low stomach acid. Besides helping digest food, stomach acid acts as a disinfectant and can prevent harmful bacteria from making themselves at home in your gut. Unfortunately, millions of Americans are placing themselves at risk for getting SIBO by taking antacids and acid-blocking drugs known as proton pump inhibitors (PPIs), such as Prilosec, Omeprazole, and Nexium. While you may get relief from your heartburn, the side effect is an altered mircroboime that causes havoc in your digestive process.

Other people develop SIBO because they have slow transit time in the GI tract and/or reduced enzyme production. As a result, their food does not digest quickly enough, and it sits in the small intestine, creating the perfect environment for bacteria to feed and ferment on the undigested food.

Environmental factors also play a role in the rise in SIBO. Consuming meats that have antibiotic residues and washing our hands with antibiotic soaps alters the terrain of our guts and also promotes overgrowth of harmful bacteria.

Bacteria feast on certain foods and produce excessive amounts of the methane or hydrogen gas that are the hallmark of SIBO. Among the common offending foods are sugars, artificial sweeteners, corn syrup, grains, beans, high-fructose fruits, and vegetables that contain high amounts of fructose.

Some people may try eating better to reduce bloating and the symptoms of SIBO only to find that it seems to make things worse. The gas, cramping, and bloating may increase with a change in diet because some of the “healthier foods” such as broccoli, brussels sprouts, lettuce, apples, blueberries, and bananas contain high amounts of fructose. (See the list “Foods Fermented by Small Intestine Bacteria.”)

How Do You Know if You Have SIBO? 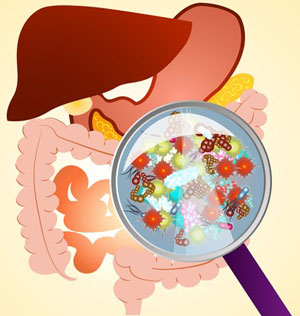 SIBO can be diagnosed by several different methods. The most accurate method, but very costly, is to have a doctor perform an endoscopy that measures the amount of bacteria found in the fluid in the small intestine. Easier methods include a breath test that measures hydrogen and methane gases that are produced by fermentation. Breath tests, however, often show false negatives for SIBO and are inaccurate for diagnosing SIBO more than half the time. Organic acid testing is another tool that can be used. In my clinical practice, I find the most practical and accurate way to determine if a patient has SIBO is using a 24-hour urine analysis in combination with a fasting and a postprandial (after eating) exam. This method not only diagnoses SIBO accurately but it also identifies most of the underlying causes of SIBO.

The traditional medical approach to SIBO is to use antibiotics to wipe out bacterial overgrowth in the small intestine. My patients have found that this has limited results. Usually the patients’ symptoms rapidly improve in a few days, but their symptoms return with a vengeance in a month or two and may become worse. So the physician places them on antibiotics again, only to have the symptoms return again. The problem with this approach is that the antibiotics destroy both the bad bacteria and the good bacteria in the microbiome. This creates a sterile medium for resistant harmful bacteria and yeast to grow that even probiotics cannot solve.

About 60 percent of the people who have SIBO will have fungal overgrowth at the same time. This is called SIFO—small intestine fungal overgrowth. Essentially SIFO is candida or candiasis combined with SIBO. The traditional-medicine approach is kind of like going to war on the bacteria with an unabridged scorched-earth attack. You may win the initial short-term battle only to become embroiled in a long and lasting war that devastates the host.

In practice, I focus on making love, not war. What do I mean by this? We work with the body’s own defense mechanism, diet, and bacterial balance to restore harmony to the gut. Our focus is on stimulating the immune system to fight the harmful bacteria, reducing intake of fermentable foods, and restoring the “good” or friendly bacteria. In the process, we employ specific probiotics that have been proven to restore the balance between good and harmful bacteria, and sometimes we may use specific herbs to reduce overgrowth of harmful bacteria. Through time, patients are able to restore their intestinal health with lasting improvement.

SIBO can create havoc with your health. Complications from untreated SIBO are malabsorption of nutrients, such as iron, B12, and crucial fat-soluble vitamins—such as vitamins D and K—that prevent osteoporosis.

If you’re suffering from belching, burping, and bloating after meals, or have been diagnosed or think you have SIBO, get relief now before it progresses. Call Dr. Patrick’s office today at 530-899-8741 to schedule a consultation to find out how you can feel better again.

Since 1999, Dr. Patrick Giammarise, DC, HIS, has helped North State residents by using a whole-body systems approach to health. He specializes in providing natural relief for food and environmental sensitivities, intolerances, and digestive and digestive-related problems. For more information contact Dr. Patrick at 530-899-8741 or visit www.DigestionReliefCenter.com.