Retrogrades rule these next few months. And I must stress that when a planet is in its retrograde cycle, it is as close as it can get to Earth as we both orbit the sun. For this reason (and a few others), when a planet is retrograde it is at its strongest. The internalizing and obfuscating properties inherent in all retrograde motion turn planetary energies inward, preserving and conserving them and making for a hidden reserve of power. Direct planetary motion, on the other hand, tends more toward the dissipation and expense of energy upon the environment. You might say retrograde planets are like the tortoise and direct planets are like the hare.

Look back at this summer’s events during the Mars retrograde in July and August, and even into September. Hot spots and hotheads were the norm. Much tension and anger were built up, which need release. Fortunately, Venus, the antidote to Mars, comes to our rescue, turning retrograde on October 5 in Scorpio, the sign ruled by Mars, and then backing into her own sign of Libra. I can tell you gentlemen out there: Shut up and get out of the way this fall. Let the ladies show you how it is done. Ladies, start your engines. Put on your best Venus. Civility, custom, beauty, and balance do matter. Venus matters. Not just Mars. Passion as paintbrush, not the point of a sword. The Venusian qualities we can tap this October and November will do us all a lot of good, putting many of us back on track toward sanity and safety.

I like the idea that Mercury follows Venus, which follows Mars. Venus brings calm to heady Mars, Mercury brings clarity. First, we calm down, and then we talk. First, we apologize, and then we get down to business. And with Mercury retrograde this time in the professorial sign of Sagittarius, there is going to be a lot to talk about. Truth has a way of rising to the surface no matter how many diversions are put in the way.

Election Day is downright scary when I think of the ramifications for free elections and democratic principles. It is the dark of the moon in Scorpio, which is just rich with hidden and shady possibilities. Emotions rule. Secrecy too. Pay strict attention to your surroundings; watch for the sleight of hand, and heart. Whatever you do, stick to your convictions. Don’t let events keep you from voicing your vote. I highly recommend voting by mail this time. What is unnerving to me is that Election Day is the one day in 84 years wherein Uranus is backing into the Martian sign of Aries. Ouch. This could hurt. And keep hurting right into the spring. I highly suspect that the blue wave strikes with a pinkish hue, President Trump fans the outrage, “it was rigged,” and we spend the winter fighting more than just the cold and ice. Fortunately, spring is not that far away. 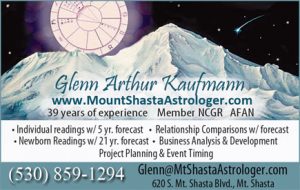 Glenn Kaufmann has been a professional astrologer for almost 40 years. He teaches classes and consults with clients from across North America at his Mount Shasta office. For more information see his ad.