Unlike the Aztecs and other indigenous groups in the Americas, the Maya clearly did not regard 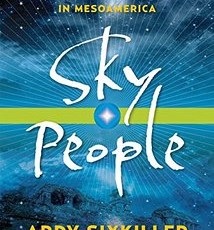 Unverified claims of ancient astronauts in the Americas have been made for decades, most prominently by Erich von Daniken, author of Chariots of the Gods?: Unsolved Mysteries of the Past. Von Daniken proposed that the Maya had neither the intelligence nor the tools to create the massive jungle cities throughout Mesoamerica. Ken Feder, archaeology professor at Central Connecticut State University, scoffed at von Daniken’s theory and suggested there is no evidence that the Maya were visited by, inspired by, or mentored by ancient extraterrestrials.

A Maya elder, who identified himself only as Ramiro disagreed with both von Daniken and Feder. “The old, old stories tell us that the Maya were guided to this land by the Sky People,” the elder said, “but these are not the stories we tell the invaders. The ancient Maya referred to themselves as the children of the Mayab or inhabitants of the Land of the Chosen. . . The invaders [Spaniards] and their priests feared our knowledge about the Universe and our origins. They thought it was evil and rejected it as the work of the Devil. They were such uncivilized men who did not appreciate nor understand an advanced culture like the Maya. . . “According to Ramiro, even today, chants allow the Maya to speak to the Star people. “There are living Maya who can talk to the Sky People, but it is an ancient practice, alive and well in Guatemala and Mexico.” When asked what the Sky People tell them in their communications, Ramiro spoke about sad things that were about to happen to this earth. “They tell us to be ready with our chants and the Sky People will remember us and come for us. We just need to say our chants and they will hear. They say that one day a great volcano will open under the sea and all the land connecting North and South America will drop into the ocean. As the land sinks, all of the people of these countries will not know where to go. There will be only the water, but the Maya will be taken by the Sky People to the heavens.” When asked if the Maya would return to Earth once the destruction was over, Ramiro replied, “Some of us will return, but others will go to another star to begin a new world. This is what the Sky People tell us.”

Yoc, a Guatemalan elder, believes the Maya not only came from the stars, but that humans are not alone in the universe. “There were many different Star People. They come from many different places. Only one group is connected to the Maya. Some of the Star People are from this solar system, but not all. There are 67 solar systems in a confederation and … thousands of space craft visit Earth on any given day. At this moment, there are hundreds of space ships circling the Earth. Our governments do not have the technology to see them.”

Yoc was joined in his assertions by another Maya elder who maintained that the Sky People (aliens) visited Earth and stayed. “My grandfather told me that the Sky People came to Earth and stayed. They did not leave as some of the white men write. But catastrophe struck our great civilizations. We are what remain. We are the survivors. Before you discount us, be warned. All great civilizations collapse whether through war, famine, or a weather event. They all meet their end. Five thousand years from now a scientist may unearth the Statue of Liberty, and speculate that she was the goddess of flame who brought fire to the world. I have seen your Statue of Liberty. I went to New York to the United Nations. You have many gods in New York City that the people will cling to if their world is destroyed, but like the Maya, many survivors will choose not to remember.”

While archaeologists continue to uncover forgotten civilizations hereto unknown; it has been suggested that many civilizations, including the Maya, were terminated by cataclysmic events. It may be that humanity’s origins and history lie in the oral traditions of indigenous people and that we are all space travelers.

2 comments on “We Came from the Stars”