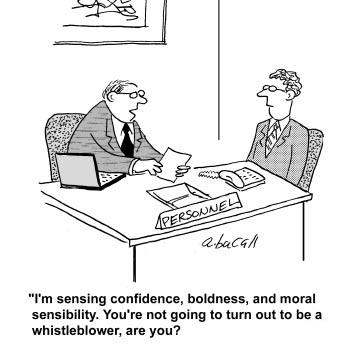 Before you try to answer the question posed in the title, let’s look at some 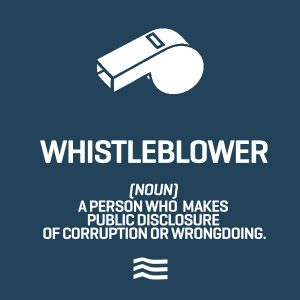 history and imagine what our world would be like without people who were guided by their conscience and integrity instead of their corporate/political masters.

The list of whistleblowers who were marginalized, sued, and thrown in prison only to be exonerated many years later would fill a book, and has. So when we hear about the “Most Dangerous Man on the Planet,” as President Obama calls Edward Snowden, should we forget the lessons of history and rush to judgment on a person who has given up everything to keep his integrity? Then there are people such as Bradley Manning, who leaked diplomatic information that includes the now-famous video of a U.S. Apache helicopter firing on a group of civilians. The backlash from this and other recent whistleblowers has had serious repercussions on our government, which means that they also affect our lives. But what are the repercussions if we continue to ignore today’s whistleblowers and basically “kill the messenger” and ignore the message, which, by the way, is the whole point? And dare I even mention Julian Assange and WikiLeaks and the relentless retaliation he’s gone through?

Obviously I could shine light on many whistleblowers who have risked their lives to make us aware of the inner workings of the tobacco, food, and pharmaceutical industries, the oil profiteers, the corrupt and illegal banking practices, Wall Street, climate/geoengineering, and the constant attempt of government to control the Internet. This subject could get into, and has got into, many debates about the pros and cons of whistleblowers but I would like to offer a very simple quote that is the very definition of what I’m getting at: 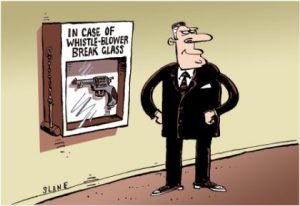 “When exposing a crime is treated as committing a crime,

you are being ruled by criminals.” Anonymous

Ask yourself this: “How many bankers, Wall Street executives, corporate CEOs, mortgage lenders, or politicians have gone to jail lately over criminal activity?” We do have people such as Bernie Madoff who went to jail, but only because he swindled the wrong people, the “1 Percenters.” The only people who really went to jail or suffered some sort of retaliation were the whistleblowers; in fact, the perpetrators of these crimes received billions of dollars in bonuses as they disappeared into the sunset or took high-level government positions, where they now have even more power and control. All of this happens right in front of us and so many people simply can’t see it (read my article in the last issue on cognitive dissonance and also look up “inattentional blindness” to understand more).

I recently researched William W. Thompson, who made statements that forced the Centers for Disease Control and Prevention (CDC) to admit that it withheld data linking vaccines to higher rates of autism. I was told months ago by two local doctors and several medical professionals to stay away from the subject of vaccines because I would suffer the wrath of powerful organizations and medical groups. If you’ve been following my articles, you know that I wrote on this very subject anyway. Now, here we are with the evidence coming out from high-level officials, doctors, and researchers that this is a very serious situation and needs to be completely transparent so the public can make “informed” decisions for their children.

Most of you by now at least question GMO foods and labeling but I still see more people buying traditionally processed GMO foods than are at the Farmers Markets buying non-GMO foods and at the same time supporting our local farmers. So much of our produce now comes from China—you know, the country where the fish farmers will not let their children eat the fish, such as tilapia, that they raise and who send it to us instead, the country where more than 70 percent of the rivers are polluted from industrial, chemical, and textile plants. How can an intelligent person think that he or she is eating safe foods grown in China?

If you are still reading this article, by this time you have probably had enough but I will leave you with this: The next time you go to buy that $5 shirt or that really cheap pair of shoes, go home and watch The Real Cost documentary about the fact that the fashion industry is the second-largest polluter on the planet, the oil industry being number one. We all need to wake up and change the way we think about our lives and what’s important and remember that with every dollar we spend we are voting. And don’t get bogged down with one issue because the problem is a systemic problem from top to bottom. If we don’t take immediate action to change ourselves, our community, and the world we live in, we will lose control of our destiny as a human race because life will go on … with or without us.

Please keep in mind that it is always my intention not to tell you what to think; my intention is to get you to think for yourself so you can make the really important decisions that will affect your life and your children.

“Our most basic common link is that we all inhabit this planet. We all breathe the same air. We all cherish our children’s future. And we are all mortal.”

Thank you once again for your time.