My “spiritual journey” began in my 20s and consumed every part of my mental/emotional awareness. I was more committed to my “path” than to anything else in life. What I didn’t realize, however, was that my devotion was driven by the unconscious belief that I wasn’t good enough. That I needed to somehow be more “whole … more conscious … more awake.” I tried everything the spiritual path had to offer: study, daily practice, meditation, yoga, healing arts, medicine ceremonies, you name it. In the end, I felt exhausted and disappointed. It seemed that every experience led to a high that eventually wore off. I still had the same triggers, fears, habits, and patterns that I had spent years trying to fix. It was my Shadow Self.

What I thought was determination to live an awakened life was actually unconscious perfectionism. Eventually the path to awakening became self-destructive, as I pushed myself harder and harder to achieve something, feel something, be something. … The result was both my greatest collapse and my greatest victory.

At some point, about 10 years into living and breathing spirituality, things began to get … real. The 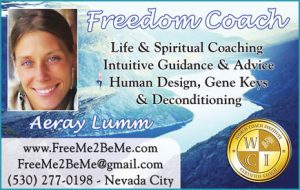 “magical, synchronistic, abundant” life I had been living suddenly became incredibly challenging, and my rock-solid faith began to crumble. I fell into a deep depression, a “dark night of the soul.” I withdrew from my community and fell into a kind of despair. In the trenches of my darkness, I waited for answers that never came. Eventually it felt as if there was only one thing left to do … let it all go. I’m not talking about some kind of “woo woo” theory here. This was a very practical, very rational feeling of being over it! I took the entire package of spirituality—the meditation, books, praying, mindfulness, positive affirmations, and anything else that fit into that box—and I threw it right out the theoretical window. None of it seemed to create real change. It just felt as if I were carrying around more baggage and more layers than when I had started 10 years earlier. I wasn’t happier, and I didn’t feel free. I just wanted to be myself … to live and to stop trying so hard.

This began a yearlong phase of my life that I call “spiritual detox.” During this phase I allowed the feelings of disillusionment, disappointment, and judgment around the “spiritual path” to surface. I stopped comparing myself to others, stopped striving for some temporary experience of peace and perfection, and I started letting all my shadows come to the surface. I allowed parts of myself that I had been ashamed of for years—anger, impatience, fear, judgment, control, manipulation, resentment, selfishness—and I used the word f$ck a lot. I stopped trying so hard to speak in ways that made me sound “conscious,” and I used words such as always/never/good/bad/right/wrong. I found myself enjoying foods, media, books, and music that I had previously judged. I hadn’t abandoned my values or my intentions; I just allowed the shadows to arise alongside them. I found that it isn’t the shadows themselves that create disharmony; it’s how we feel about them. The key was not identifying with them. These were childlike parts of me that were still angry, sad, immature, fearful, stubborn, resentful, yearning, and defiant. I watched them with curiosity and amusement as if they were my own small children with underdeveloped emotions and reactions. I listened to them, respected them, and gave them a place in my life. If I felt shame, guilt, or any other feelings around my shadows, I allowed these too. If I was complaining, blaming, or playing a “victim” role … I would own it.  The act of allowing these shadows felt like unabridged freedom! I didn’t apologize for my feelings. They were what they were, and I left them alone … and watched.

Letting my shadows out caused them to “grow up.” As time went on I watched with wonder and amazement as these shadows within me began to change on their own. This was a surprise that I had not expected. Through a combination of awareness and allowing, change found me. My selfishness became more giving; my insecurity became confidence; my vanity became more humble; and my triggers began to lose their charge. The greatest change was that I was now OK with being “flawed.” Through allowing myself to be just as I was, I reached a whole new level of presence, surrender, authenticity, and real transparency. My self-esteem soared, despite the ever-present shadows. I felt an incredible amount of compassion and I no longer felt critical and judgmental of other people or the world. I had space for so much more.

Toward the end of that year, I started inviting back into my life some of the “spiritual” pleasures of my past (meditation, prayer, and so on). Only now, it was about enjoyment, fulfillment, and seeking out experiences that brought joy to my life. There was no need for any kind of daily practice or meditation. My moments were filled with freedom and gratitude, and it was completely effortless. Allowing myself to experience all of my shadows did not make me a “bad” person, as I had feared. It made me a bigger person—more whole, and with more depth.

The truth is that being “conscious” has nothing to do with what we do, say, think, or feel. It has to do with how aware we are of these expressions, and how much we can allow them. Ultimately, it’s the shame and guilt around our shadows that create the charge within them. These shadows are an inherent part of our human experience. To try to eliminate them is to try to take away our humanity. Nothing is wrong with striving to reach higher frequencies and deeper understandings or with daily practice. We are, however, first and foremost human. Without accepting the shadows that come with that, our search for spirit will be an attempt to hide from ourselves.

Truly being “human” has been the greatest spiritual journey I accidentally took!